For this presentation, I want to take up Kameelah Janan Rasheed’s question, “Is it okay for things not to exist for future generations?” (41:00). This question was particularly fraught for Janan Rasheed, who grappled with her own “archival impulse,” and it was also situated within a discussion about Blackness and archives: empowering Black people to create, manage, and dictate the terms of their own archives (Jules), protecting Black cultural production from being made legible or knowable through archives (St. Felix), and using illegibility or invisibility as a means of escape from the surveillance of blackness (Browne). For me, this question is central to this week’s readings in that they all, in one way or another, argue that to address the archival injustices that silence, exclude, or overwrite marginalized voices, those voices, those communities must be involved. They must be able to determine which parts of their stories should or should not exist for their own – and others’ – future generations.

For Michelle Caswell, every step of the production and maintenance of archives should reflect this self-determination. Archivists, then, have a set of obligations: “to center those people who have been marginalized in our appraisal decisions moving forward,” to describe records using “the same languages that communities use to describe themselves,” and to take a “survivor-centered approach…which is centering survivors [in] decision processes” about what is done with archived materials, such as digitization” (Cole & Griffith, 24). This suggests that community involvement must be situated not at a superficial level, after the fact of collection or preservation, but from the beginning and throughout.

I think Weeksville Heritage Center (WHC), a “multidisciplinary museum” in Brooklyn, is attempting to operate along these lines. Weeksville was founded by James Weeks in 1838 and would become “one of the largest known independent Black communities in pre-Civil War America” (The Legacy Project). This community flourished through the work of African American entrepreneurs and land investors and because of its residents, who were deeply committed to sustaining their independence (5 of July). Weeksville Heritage Center’s (WHC) mission is to continue this work, to “document, preserve and interpret the history of free African American communities in Weeksville…and to create and inspire innovative, contemporary uses of African American history through education, the arts, and civic engagement” (What We Do). One of their main programs is The Legacy Project, which is described as “[standing] for the freedom and right to know, document, and defend one’s own history,” with the goal of keeping Weeksville’s “legacy alive and vibrant for future generations” (Legacy Project). WHC hosts Legacy Project events at least every month. Some recent examples include “Embodying Archives,” wherein participants were invited to explore individual and collective memories carried “genetically, spiritually, and physically” through “performances, discussions, and communal movement” and “Archives for Black Lives,” which was a day of intergenerational self-documentation where participants were taught strategies for recording their oral histories and digitizing family photographs. 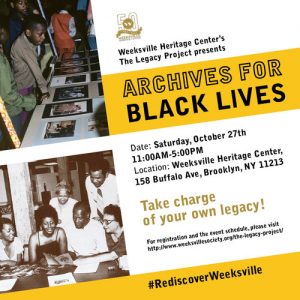 On November fourteenth, visual artist Elise Peterson will lead a workshop on digital collage. Peterson’s digital collage work incorporates portraits of artists of color within famous Matisse paintings, and some have been displayed on billboards in the United States and Canada. For The Legacy Project, digital collage is a technique “that offers [the] chance to push the visual boundaries of a design, illustration, or art piece,” but it also seems to enact an intervention, whether in a historical narrative, modes of representation, or public spaces. The Project is a manifestation of Weeksville Heritage Center’s interest in supporting “self-reliance, resourcefulness, transformation, collaboration, celebration, and liberation of Black persons in America.”

Here, WHC seems to align with Caswell’s idea of the work of archives as the work of social justice (Cole & Griffith, 23), as well as her argument, drawing from Geoffrey Yeo’s definition of a record as a “‘persistent representation of human activity that travels across space and time,’” that records need not be material but can also be oral, kinetic, etc. (Cole & Griffith, 23).

By giving Black community members access to archival strategies and technologies, The Legacy Project creates a space of self-determination for Black people within archives; giving them a chance to modify archives by filling silences with newly recorded oral histories, for example, or to create new collaborative archives with newly digitized material. This project is explicit in its orientation to future generations – to keeping these spaces open for them and creating a foundation or toolkit for them to use. Importantly, however, only some of the material generated through The Legacy Project is archived at the WHC’s Resource Center for Self-Determination and Freedom. Clips of oral histories recorded at the museum are available to the public through the Center’s digital collections, but The Legacy Project, operating alongside and sometimes with the Resource Center, does not aim solely to generate material for these digital collections nor to make such material universally accessible, rather it gives Black communities and families the resources to preserve their materials for their own purposes. Here, it is clear that Black communities are centered in the appraisal process, both in the sense that the archive is made by and for them and in the sense that their lives are not simply objects of knowledge but that they themselves are subjects involved in knowledge production, entitled to keep their records from the archive in the first place. 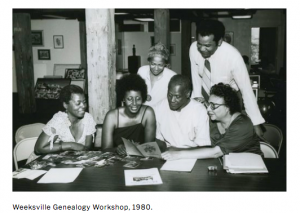 To return to Kameelah Janan Rasheed’s question – “Is it okay for things not to exist for future generations?” – while The Legacy Project’s primary focus may not be archiving records for everyone everywhere, it does have an interest in preserving material for the future generations of its own community. Preservation and stewardship are highly personal in this context, and though the archives produced through the Project’s programs might hold importance beyond the family, it is up to that family to decide whether and how to share them. In this, I also see Doreen St. Felix’s point that we have to acknowledge and accept that there are things we might never be able to access or understand; we have to understand that legibility can be oppressive (1:07:39).

Janan Rasheed also asked, “What are the limitations of radical visibility?” but I wonder, what are the limitations of radical invisibility? I am thinking here of Joy Buolamwini’s advocacy for more inclusive code and coding practices, which, for her, would involve modifying existing systems and using more inclusive training sets. After encountering facial recognition software that could recognize her white colleague but not herself, Buolamwini formed the Algorithmic Justice League to combat bias in the design and development of algorithms. Does Buolamwini’s interest in greater inclusivity and visibility imply greater legibility? By contrast, Nabil Hassein has written “against Black inclusion in facial recognition,” arguing “I have no reason to support the development or deployment of technology which makes it easier for the state to recognize and surveil members of my community.”

Is there a productive space between legibility and illegibility? Should there be? In her book Dark Matters: On the Surveillance of Blackness, Simone Browne argued that “protoypical whiteness,” the “cultural logic that informs much of biometric information technology” becomes meaningful only through “dark matter,” or bodies or body parts that confuse biometric technology such as facial recognition (Browne, 162). While she recognizes that the exclusion of “dark matter” from the design processes of these technologies risks reproducing existing inequalities, she also wonders whether there is some benefit to remaining “unknown” or illegible to them (Browne, 163). She points to the potentiality of this illegibility, saying “then and now, cultural production, expressive acts, and everyday practices offer moments of living with, refusals, and alternatives to routinized, racializing surveillance” (Browne, 82).

I want to end with these images from Robin Rhode’s Pan’s Opticon (2008), which Browne uses in her analysis and on the cover of her book. In them, Browne argues, the subject’s “ocular interrogation” of the Panopticon and “the architecture of surveillance – corners, shadows, reflections, and light – [covers] the wall with dark matter. … [He] is not backed into a corner, but facing it, confronting and returning unverified gazes” (Browne, 59). For Browne, this kind of looking, which she refers to as “disruptive staring” and which bell hooks has called “Black looks,” is a political and transformative act with, I think, potential for archives and beyond (Browne, 58).

Harrison Cole and Zachary Griffith, “Images, Silences, and the Archival Record: An Interview with Michelle Caswell,” disclosure: A Journal of Social Theory 26 (July 2018): 21-7.